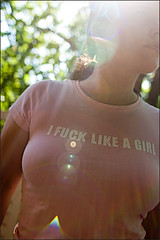 So, one day to go. One measly day of trying to cram as much work in as possible and then… on hols for two whole weeks. 😀 Woo. Tomorrow night we’re driving to Tampere for the Suzanne Vega concert (and yeah she is still good even if some of you people haven’t heard from her since the 90’s 😛 ) and on monday we’re off to Italy. Finally! And then… I shall return a 30-year-old. 😐 Yikes. I will report back on how different a person and how much wiser I am afterwards.

So Jenni (who, incidentally, fucks like a girl) was over today to watch Hard Candy with me. I’ll try to get past the bad quality of the copy she brought and form an opinion based purely on the plot and acting (that’s quite hard to do since, for me, the audio-visual side of movies is quite a big part of the experience usually).

!SPOILERS!
The way I saw it, the whole point of the film was to have a jab at your own morals and, more interestingly, to demonstrate that nothing in life is black and white.

The story is about 14-year-old Hayley and 30-something Jeff, who get to know each other in a chat room (seemingly serendipitously) and then proceed to meet in real life. While the film starts with the viewer thinking Haley is the one who shouldn’t be meeting strangers, especially strangers as old as him, off the internet the roles reverse the further the plot develops – and Jeff realises Hayley’s there after careful planning on how to punish him for what is at that point his assumed involvement in pedophilia and even murder. Hayley, played by Ellen Page, is by no means a likable character. She’s very annoying, too smart for her own good and really hard to feel any sympathy towards. Jeff, played by Patrick Wilson, on the other hand seems like a reasonably normal bloke. He’s well mannered and likable, and hey, he’s even a photographer! 😀 It’s easy to think that he’s just being unjustly vilified by an unstable teenager. In fact, to start with you have to dig quite deep to find any justification for Haley’s vendetta towards him, but I think that during the course of the movie the scales do dip. You come to realise that yes, he has done something horrific, even if he denies it even from himself. The trouble is of course, why should this annoying little girl be the one to carry out his punishment?

In the end, to me, it’s not her that does carry it out to the end. It is in fact Jeff himself and his conscience and fear of being judged and punished the traditional way.

It’s difficult (maybe impossible?) to decide where to stand. What I thought was the cleverest thing about the script was the way the personalities of the characters were so far removed from the ‘normal’ hollywood victim/monster traits. It’s so easy to see Jeff as a normal man, who should be given the benefit of doubt, but who in the end does admit to having been involved in something truly evil, which he should suffer for. And it’s so very difficult to like the disturbed Hayley and see her as nothing else than a maniac bitch. And yet, for her to be doing what she does she must have gone through something so horrible herself that in her eyes (and possibly every victims’ eyes) it justifies her every action (how ever, this fact is never anything but hinted at, unlike any other vendetta film you’ve seen). It’s difficult to find redeeming qualities or feel sorry for someone who’s personality you don’t like, and it’s hard to think that a nice person could be bad. We’re so brainwashed by movies and even the news to believe that we can spot the beady eyes of an evil person from a mile off, and that victims are always sympathetic characters and easy to relate to.

So I suppose the question is, when does a victim cease to be the victim and turn into the monster? Or vice versa. With the complex way we as humans are built, that is one hard nut to crack. But possibly, everything isn’t quite as black and white as we’d like to believe.