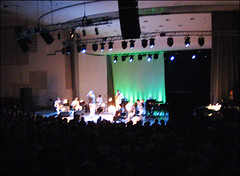 I’m not sure it’s possible to put last nights experience into words. I don’t think I know eloquent enough words not to turn something so magical into… less so. I’ve been told a lot of times that to really appreciate Antony and the Johnsons, you have to see them live. Well now I have. And it was almost a life-altering experience. Of course, if I was to say to you now that to really appreciate them, go see them live, those will be just words… until you do. It’s absolutely impossible to tell you what it’s like, you have to experience it yourself.

When I started listening to Antony it took me some time to ‘get used to’ his voice. Now I know exactly why that was. His voice is something so pure, so full, so three-dimensional, that it is impossible to capture the full miracle of it in a recording. It needs to be free for you to feel every nuance, for you to truly appreciate what a gift this man has.

The concert hall was sold out, packed to the rafters. It was boiling hot. I’m sure the people standing in the middle of the floor squashed by others were even more uncomfortable than us sitting in the back row. And yet, everyone, each and every person, was enraptured, hanging on to every note. I’ve never experienced such an atmosphere in a concert where the whole audience practically holds their breath, staying quiet as can be, because they don’t want to miss any tiny note from this man’s lips.

The whole time I was sitting there I was thinking what a miracle music is, the fact that there are people who are able to create such beauty is both humbling and mind-blowing – what an unbelievable gift we have as a human race. His voice was more than just another instrument; it was like a complete separate presence, it emoted so much, revealed secrets, connected with something primal and something sacred.

I especially enjoyed Shake That Dog, You Are My Sister, Twilight, Bird Gehrl and Hope There’s Someone. And of course the amusing, yet hauntingly beautiful cover of Beyoncé’s Crazy In Love. For some reason I found it hard to relax into his rendition of Cripple and the Starfish though. I think the recorded version of that song is embedded somewhere so deep in me that it was impossible to fully let go of that and enjoy the arrangement. Having said that, the whole experience just from an emotional point of view, on a scale of 1 to 10, was about 645. Even Stu, who was pretty much dragged there against his will, said that he was completely blown away.

Here’s a video of the Beyoncé cover from two days before in Sweden. I’m so happy our venue was much more intimate. The atmosphere seems completely different in such a big outside venue.