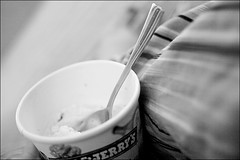 I probably shouldn’t (definitely shouldn’t) admit to this, but I’ve been having this strange urge to listen to Linkin Park tonight… 😐 I blame Miami Vice actually… Numb just kicked it off so nicely and got stuck in my head. 😛 I do imagine there’s only so much of a good thing one can take though, hopefully one night of over-indulging will cure this. Try not to tell anyone though k.

Anyways, I’m home again. Got back to the washing machine being broke, the normal pile of stuff to sort out and bills to pay, and just this general feeling of dread hanging over me. I did get a lot sorted today though, even managed to finally book the registry office for the wedding! So that’s at least one ‘vague stress about the future’ thing taken care of.

I had a good long chat with Annis this evening, which really cheered me up (should make a point of taking the time to phone people more often). She had good ideas for where to have the wedding (which was really starting to stress me out as everywhere I’ve looked seems to be booked already) and we also came up with an exciting project we will hopefully start working on in the future. Not gonna say what it is yet in case that’ll jinx it, but it’s gonna be good! 😀 Yup it is. 😀

The lovely gift of flu that Susanna so kindly passed on to me is starting to ease off. Tomorrow is friday. Perhaps it’s not all so bad after all.