The World Championships in Athletics are in Helsinki at the moment, which seems to be a source of lot of excitement for many people here. Having said that, it rained all day yesterday and today it’s been so windy that it makes me nervous about where the javelins etc. are going to land. Anyways, the reason I brought it up was because I found the number er.. plates on the athlete’s chests quite amusing. Now, being finnish I obviously know that Espoo is perfectly respectable name for a city, my mum even lives there. But I can’t help but wonder how many people read the ‘Helsinki 2005 Espoo’ tag as ‘Helsinki 2005 is poo’. 😐 Maybe it’s just me, mind.

Riina and the kids were here on Sunday, which was a nice change to me always being over there. 😀 Johanna and Olli also came over for a quick visit and Olli was completely taken by Noa. It was so very endearing watching him trying to hug Noa at any chance he got. =P

Later we had a short photoshoot with Noa and Elli because I owed Riina some pictures. It was very hectic, with naked babies running around the place and usable pictures very few and far in between, but it was definitely a giggle. I don’t think child photography would be something I could do for a living though. Meaning that it’s different – and fun – to shoot children that you know, but I imagine working with strange children behaving badly would be frustrating beyond belief. Here’s some ‘behind the scenes’ snaps. 😛 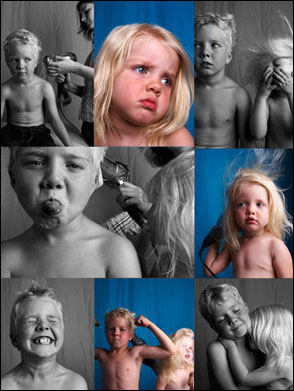 Oh and did I mention I painted the bathroom light blue/turquoise. And after a lot of bartering I got a permission to put the kind of theatre dressing room light fitting with multiple bulbs in there. It’s going to be gorgeous. <3 Unfortunately it hasn’t been just fun and games though. I have a peculiar pain in my ear that I suspect might be toothache (shit) and today we noticed that our credit card has been cloned (or something to the same effect) again (well different card and country this time), and there’s nearly 2000 euros waiting to clear from the account (double shit). Hopefully it’ll all get sorted… *sigh*