Just when I was complaining to everyone in England how there is no snow in Finland, it all came down in the last two days. I went to take some pictures, which was a good idea before I found myself knee-deep in snow and desperately trying to shelter my camera from the blizzard. Umm. Didn’t realise there was quite that much snow until I was in it. 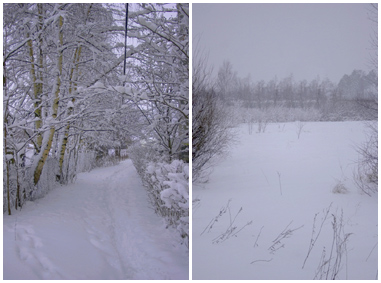 I’ve had a very pleasant couple of days actually. After going to press it’s quieter on the work-front for a day or so. So yesterday, after having a boring morning, Miikka and I decided to be really lazy and spent the afternoon doing pretty much nothing. Armed with unhealthy food like bacon butties, crisps and some vodka, we sat in front of the telly, mainly playing PS2. I bought Singstar and Singstar Party recently, and what great fun they are. 😀 Especially if you’re a shit singer like we both are. I obviously won all the time though. 😛 I’m sure that Stu, who was in the audience later on, enjoyed our angelic voices tremendously. 😐 Anyways, it was a nice day and a nice evening and felt like the good old days when Miikka used to practically live at ours – way back when we lived in the same city.

The week in England went quite quickly, mainly because I spent so much time sleeping I think. Very busy and boring (yes, you can have both at the same time), apart from my normal weekend trip to Saffron Walden to see Riina and the gang – Elli grows way too fast!

Today I got quite a lot of work done in the end and feel all pleased with myself. There’s a lot of things to be happy about actually. It’s Friday, Stu passed his trial period and now has a permanent job, I’m home, it’s all white outside and I’ve got an idea for a new series involving fruit. It’s all good. 😀