Hey, anyone else on jaiku? It’s the new twitter you know… 😛 You can see my updates when you look to the left right now. See. Even when I’m not here I’m everywhere! 😀

I keep forgetting to write. Or actually, I think it’s probably a case of not having the time to write. Or at least, not having the time to think about what to write. Work has been a bitch, which I suppose is the case around this time every month. So, what’s been happening? We got the winter I was longing for. Well, we got the snow I was longing for, it’s just a bit unfortunate that it came attached with 20 degrees to the wrong direction on the thermometer. Gosh, it’s been cold! I don’t think I’ll ever get used to cold like this… Yesterday, waiting for a train in -21C (yes, the trains still run fyi :P) with added wind, I was seriously wondering what sane person would choose to live in this sort of environment. Then again, it is only a week or two out of a year… I suppose it’s short enough time to be able to forget until the next time. Still, getting along with life as normal here makes me smile about the chaos that 5cm of snow seems to have caused in England. 😀 I’m going over on Saturday. I don’t think the snow over there is going to stay around for me.

I went to the dentist yesterday to get my stitches out. That was cool and all. But for some reason my jaw has started aching like a bastard in the last couple of days. The dentist said it’s prolly just the stitches aggravating it, but it doesn’t seem to have made any difference having them out. I’ve had two nights of not being able to sleep properly from someone sticking hot knives into my jawbone. Frozen peas are a godsend I tell you. But they’re struggling, even combined with the most heavy duty painkillers. If tonight is as bad as the previous ones I think I’ll have to phone the dentist and get him to prescribe more antibiotics or something. I’m not looking forward to flying with the pain on Saturday… Oh how I wait for the time when all this tooth hassle will be behind me.

Helmi was over at the weekend, which was nice. We’ve certainly been very good in the last year or so in keeping in contact and seeing each other. We used to have this once in 1 to 2 years thing going on for the longest time. I guess everything in life goes in cycles of some sort. Anyways, it was nice to see her and we managed not to leave the house at all for two days. And we even watched one of the shittiest films ever. Cold Creek Manor. I don’t know, there’s just something really aggravating about films that sort of look good on paper but turn out to be a complete waste of time. At least films that are honest about being crap are more entertaining on a certain level.

Oh yeah, and Eve came over for a little shoot as well. I guess my initial idea was to shoot something for a Valentine’s Day theme. And I did get one shot that I’ll probably put up on dA on the day… See, it’s good to have traditions. 😛 It was nice to shoot, even though I felt a bit rusty and even though it’s bloody difficult for me to concentrate on two models at the same time. Luckily both my models were real troopers. 😀 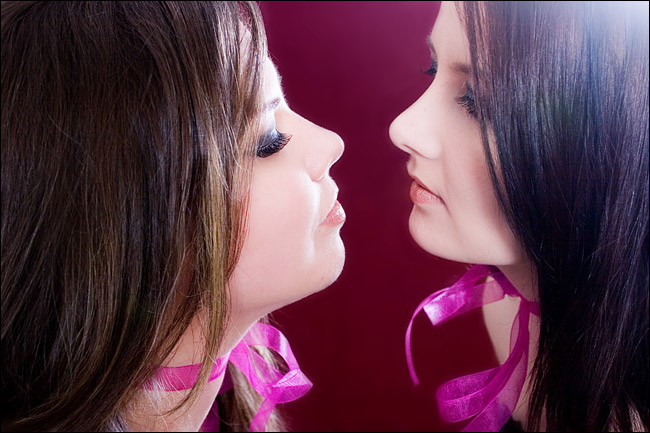