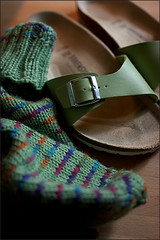 As far as mondays go, this one has been a bit blah. Weird weather as well. Sitting inside I’m kinda feeling cold and want to wear woolly socks, but outside it’s sunny and warm, until the sun goes behind a cloud when it gets way too chilly. Humm.

Spent most of the weekend at mum’s for a change. At least Sunday was pretty and summery.

Oh and saw The Da Vinci Code. 😐 Umm. I can’t help but feel that it sucked. I read the book a couple of years ago and in that format it did manage to keep up the suspence and was an alright read in an entertaining way. The film however… just seemed silly. Everything that in the book felt a bit childish and conveniently simple was magnified in the film. Obviously there were even more shortcuts, which added to the feeling of shallowness, but the worst thing about it was the tone in which the ‘message’ was delivered… I don’t know. And poor Tom Hanks does not age well in my opinion. Also, I think I’ve had an overdose of Gandalf in the past week. 😐

Got my first Holga films developed finally. Even got a few semi-succesful shots out of them. 😛 See here.