War of the Worlds
I’d been avoiding this one for quite some time. Curiosity always gets the best of me though. Besides, I’m a very firm believer in not having the right to slag off a movie unless you have seen it yourself. So now I have. And it was mostly… bloody boring. At the start I was kind of intrigued by the non-Hollywood approach of making the hero not seem like a hero at all, in fact he is running away from danger for the most of the film – but in the end even Spielberg must have gotten bored with that and suddenly Tom-of-the-funny-nipples rises to save the day again. All the special effects looked expensive, but still just like special effects. I think the best effects are those that make you forget you’re looking at cgi and suck you in so that you truly believe what’s happening on the screen. The most interesting scenes to me were those where people’s behavior in crisis was observed, but those were few and far in between. All in all I don’t think there was much attempt made to make War of the Worlds look ‘plausible’. It was just some expensive eye candy with a rather boring plot, plus the awkwardness of the sugary growing up to be a ‘good dad’ theme. I didn’t hate it, but it certainly didn’t do much for me either.

In Her Shoes
I’ve read – and loved – all of Jennifer Weiner’s books, which made me a bit hesitant about seeing this film adaptation. Hmm, what to say. I suppose overall it worked ok and captured something of the sense of the book. Purely from a chick flick perspective it was quite pleasant and even gave more than your average chick flick. I personally didn’t think Cameron Diaz fitted the role at all though (and I usually quite like Cameron Diaz) and there was something very clunky about the way the story was moved forward. Perhaps because it was adapted to be such a straightforward girlie comedy was also it’s downfall, it lacked all the emotional depth of the book and made everything that happened seem a bit trivial. I did like it from a pure entertainment point of view, but I would have possibly enjoyed it more not having read the book and having any expectations beforehand. Shirley MacLaine was fabulous though.

Oldboy
This film is in so many people’s Top 10 and I’ve heard so much praise and been pestered to see it forever. So, needless to say, the expectations were perhaps very much too high going in. I did rather enjoy the first half. The plot was certainly original to start with, and the cinematography definitely ranks quite high on the visually gorgeous side of things. My problem is that I usually have an annoying talent of spotting where the plot is going quite early on (yes, I’m one of those ‘I bet he killed her’ people, which annoys others who might have wanted to stay in suspense until the final showdown. :P), and with this plot it was just glaringly obvious to me where it was going. So for most of the film I was just waiting for the plot to catch up and put me out of my misery. I also think that after showing so much promise at the start, and having gone to all the trouble of trying to confuse the watcher, the actual underlining story was way too simplistic and insipid. I was desperately hoping that I would get surprised at the end, which didn’t happen. Having said that, I can certainly see why people rank Oldboy so high. It’s definitely head and shoulders above the standard of a stereotypical Hollywood production. And it does look very good indeed. I think it suffers from building up too big expectations without delivering the depth of a masterpiece that it aspires to be.

The Island
Going back to the stereotypical Hollywood productions then. 😛 This was a film I’d only heard bad things about really. So I went into it from completely the opposite perspective to the previous one. And everyone loves an underdog. 😀 I quite liked it, for what it was. A sci-fi action flick with a plot that was actually something not too far fetched. I liked the sleek futuristic design and gimmick here and there. Ewan did his job well, I thought, and the plot plodded along quite pleasantly. The end turned it into a bit of a chase movie, with the predictable big ba-da-boom ending. But that’s alright. It was light entertainment and I thought it was well done as such. The only thing that was very scary was how blatant product placement advertising is becoming. Sometimes you wonder if you’re watching a film or an ad.

Irréversible
This was certainly a difficult film to watch and to digest. The whole film is played backwards, starting from the most ugliest and uncomfortable scenes I’ve ever seen and slowly returning to the start where everything was still ok. Even though it was a hard film to watch (and definitely not the best choice for a Saturday evening chilling with friends… :|) I did find it intriguing. It illustrated with terrifying clarity how fragile life is and how every small decision can affect the way things turn out. At the start you can’t help but wonder what freaks these people are and how everything about them seems so fucked up, until you find out why and eventually discover that at the start, they were all indeed perfectly normal and happy. Horrible things happen in life – to completely normal people. And apparently even to people are gorgeous as Monica Bellucci.

Sideways
Finally a film that was exactly what I thought it would be. A funny, moving, and at times painful glimpse of ordinary life and human emotion. Paul Giamatti was certainly the perfect choice for the role of Miles, a failed writer and a wine buff. He gets you to feel sad with him, be happy for him and to laugh at him. There are certainly a lot of laughs to be had in the course of the road trip that Miles and, his soon-to-be-married friend, Jack are on – quite a few of them bittersweet. In a funny way, as different as this movie was to Irréversible, it somehow leaves you with a similar sad feeling. Of how small and inconsequential we really are, and how life can break you if you don’t fight back hard. And yet, most of the time it’s all out of your hands anyways.

Walk The Line
Another film that I meant to watch a lot earlier. I’ve never been a huge Johnny Cash fan (in fact, I always preferred Waylon Jennings in the bad boy of country stakes. :P), but never the less, I quite enjoy this sort of biopics. All in all, the movie was quite predictable (in terms of how biopics are played out) and in some ways a very cliché story of fame, drugs and passion. Joaquin Phoenix most certainly gives his all and wears the Johnny Cash suit with relative ease, seeing how hard it is to portray someone known for being ‘unlike anyone else’. The problem I have with Phoenix at times is the fact that he throws himself so completely into his roles that sometimes you start feeling a little detached from the character, you just look at him acting hard. And there were moments where I felt like this. Don’t get me wrong though, I don’t think there’s anyone who could have done a better job. As shocked as I was to see Reese Witherspoon pick up the Oscar for playing June Carter, I was happy to learn that it was for good reason. She kept the movie grounded and was so genuine in portraying what her character was feeling that I think she gave a heart to the movie. The best thing about the whole film was the chemistry between the main actors and the way the Cash/Carter love
story was played out – in anything but sentimental way. It certainly tasted like life. I don’t think the film was larger than life, but perhaps that also helped in making it feel more real.

The New World
I would be lying if I said I didn’t originally want to see this purely for Colin Farrell. Even having heard all the warnings about the length and boringness of it, I’m very pleased I did take the plunge. There is no denying that this is some of the most beautiful cinematography I’ve ever seen. The first hour, where the Europeans are settling in Virginia – and where Colin’s Captain Smith is spending time with the natives and falling in love with Pocahontas – is such a relaxing and enchanting joy to watch that you feel like you’re almost drifting through a dream. Every frame is gorgeous and everything looks so tactile… it’s almost like you can feel the grass underneath your bare feet or the wind on your face or the water lapping at your skin. Just gorgeous. As is Colin. But especially Q’Orianka Kilcher as Pocahontas. She is beautiful beyond words and without even too much talking conveys everything she’s feeling with sublime grace. The first half of the movie evoked such beauty to all the senses that I could have died happy just then. However, an hour and half in and you start feeling the length. Especially when you find yourself detesting the advances Christian Bales’s John Rolfe is making on Pocahontas, despite his gentle ways and good nature. As the director intended, your heart, as hers, is still in the depths of the woods with Captain Smith. Especially grueling is the return to England, the cold grey light, the way Pocahontas has been transformed into a lady… it all makes you feel cold and constrained and anxious, wanting for the scenes to pass quicker, yearning to return to the nature and ‘reality’. The bittersweet ending leaves you somehow sad but also optimistic, like it is possible to grow and it is possible to learn to love again. As almost painfully long as the film was I can’t think of anything I’d want to cut from it. Not even – or especially – the long lingering nature shots of fields and forests and water… What a beautiful piece of cinema. But definitely not one to take your action-film-loving-boyfriend to. It’s like the perfect poem in cinematic form. 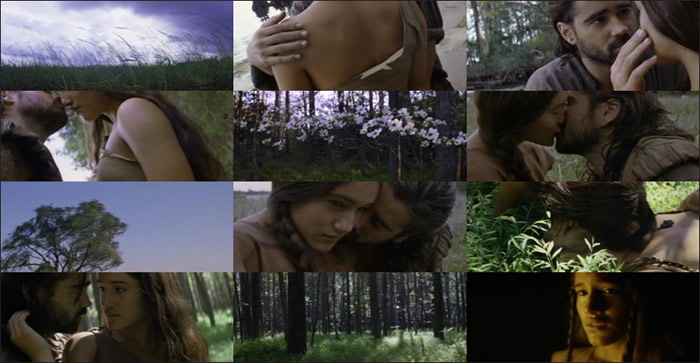