The tradition of a Christmas tree can be traced back as early as 700 A.D and has played an important part in winter celebrations for hundreds of years. Many pagan festivals used trees when honoring their gods and spirits. The Druids and Romans used evergreen branches to decorate their homes and public buildings to celebrate the Winter Solstice.

In Germany families would make their own Christmas tree decorations. Over the years, these traditions were adopted by Christians, who incorporated them as part of their Christmas holiday celebration.

During the 16th century fir trees were taken indoors over the Christmas period. In Germany and throughout Europe, families would set up trees in their homes and decorate them with colored paper, small toys for girls and boys, food and sometimes candles. As these people moved or immigrated to other countries, they took the tradition with them.

Through the years different things were used to decorate Christmas trees. In the 1900s, many trees were decorated with strings of popcorn, homemade cards, string to look like snow and sometimes fancy store made decorations.

Candles were also used as decorations and it is believed that Martin Luther, the Protestant reformer, was the first to add lighted candles to a tree. Walking through woods one night, he was so impressed with the stars twinkling through the tree branches that he recreated the look at home for his children by putting candles on the Christmas tree branches.

The first electric tree lights were used in 1882, three years after Thomas Edison has his first public demonstration of electric lights.
(bbc.co.uk) 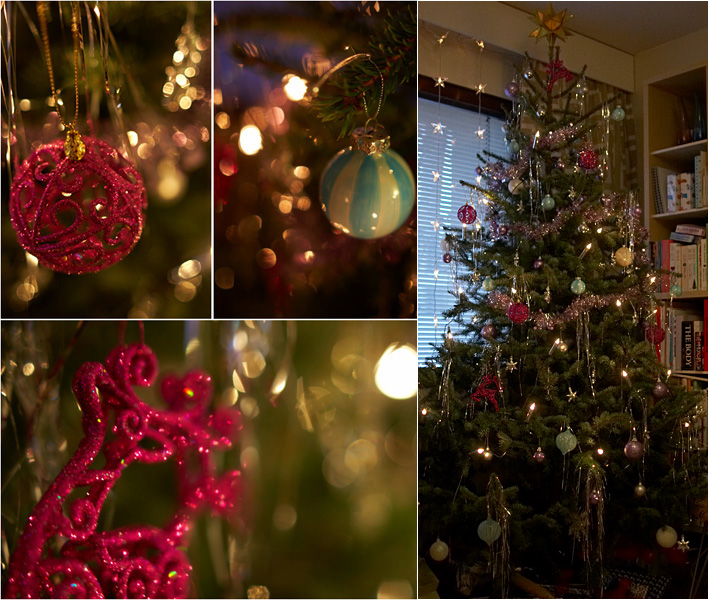