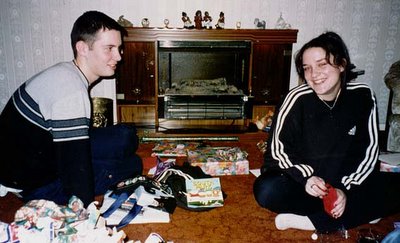 Well that whole staying up for the Oscars thing really screwed my sense of day and night. After sleeping for about 3 hours yesterday morning I crashed at 10pm, which meant that today I got up at 5am. Umm. Or actually, is that more of a normal pattern than my usual one after all? Hmmmm… 😛

Anyways, what to do at 5am when everyone else in the world seems to be asleep, even in places with funny time zones. Well, I’ve been going through old photos on my computer. A nice trip down memory lane, but also a bit of a depressing reminder of how fast time goes. Here’s one example, just how young did Chris and Nikki look at Christmas of 1999! It’s crazy how fast the years go by. Sometimes they feel as short as months. That was my first Christmas in England. It was all a bit strange and new, not to mention happening on the wrong day. 😀 Funny how quickly you get used to things though…

And to go even further back in time, check out the glasses on Johanna and me in 1993. 😀 Yes, they were fashionable back then so shut up. 😛 And then there we are in 2001 on the right, which also feels ages ago.

There are certain people I constantly feel guilty about not seeing enough of. I get all busy with life *stuff* and I can’t seem to get myself organised enough to pick up the phone or even just go and drop by, and all the time I’m carrying around this guilt of being a bad friend. And usually when I eventually do get in touch I find out that people have generally been too busy with their own life *stuff* to even really notice. So, I’ve been trying to work on letting go of the guilt. Mind you, the way these years are rolling by the more difficult it gets, as there’s this constant panic rising at the back your your mind that you should make the most of the time you’ve got. And panic is always paralysing.

These are from our Finland trip with Nikki & Ian in 2001. Now that was a good holiday. 😀 Finland always looks and behaves so much nicer when you come here as a tourist. You only get to do the nice bits and not even think about the tedious everyday-life bits. But I guess that’s the nature of holidays, where ever they are spent. Hopefully Nikki is coming to Finland this spring/summer again. It’s been almost two years since she and E were here for May Day last time, and that was a bit of a quickie trip as such.

I do believe Elisa is a tiny bit drunk in that shot on the right. 😀 And Ride, I will phone soon! I will. 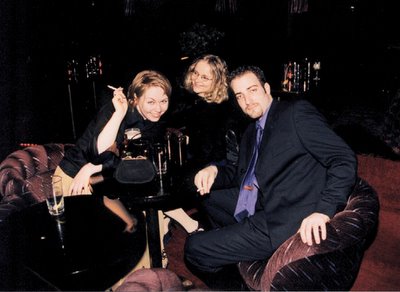 It’s probably lucky that I don’t have any really old pictures on the computer as that could mean I’d be stuck here all day. I have a bad habit of starting to go through old photo albums and then deciding I need to go though them all in one sitting…

As I’ve been already writing this for an hour, I think I’ll finish off with a picture of Raisa, Elisa and Stu at Annis’s (I wonder how the hell she’s doing) wedding, just because it’s Raisa’s 30th birthday today and this was the only picture of her I could find on my computer! Yet another birthday party I can’t attend to as I have to leave for England, but I’m sure she’ll know how to make the most of it even without me there. After all, if there’s one thing she can do it’s party. 😛 Happy Birthday R, have fun! <3 But yes, that’s enough for today. Perhaps I’ll do this photo thing again on another night when I’m up at some funny hour with nothing to do… there sure are a lot more pictures where these came from.