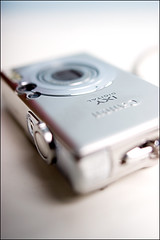 Some time ago I sold two old compact digis on eBay in order to raise enough cash to get a new one. I always like to have a compact with me, even though I mostly shoot with an dSLR, but still, it’s nice to have something small and light you can take with you anywhere in your handbag. For quite some time my choice of compact has been a Canon Ixus. I’ve had two film versions of Ixus and one digital (400) over the years, this is now my fourth model of the series.

So, I managed to sell the old ones and had enough cash for the Ixus 60, which was the right kind of size with 6mp – enough for snapshots by any standards. But when I went to my Amazon shopping basket I found out that apparently the price had gone up by nearly a £100 since I’ve placed the camera in the basket only a couple of weeks earlier! 😮 How is that possible I wonder… Anyways, I then found a reasonable deal on eBay, from a seller from Hong Kong. All the feedback was positive and most people seemed to manage to receive their goods tax free as well. Well, I sort of knew I wouldn’t be that lucky, but even with the VAT the price would be around the same as what the camera cost inAmazonn pre price-hike. So I took the plunge and ordered it.

The camera got to Finland from Hong Kong extremely quickly, in three days, only to get stuck in the customs for nearly a week… The seller hadn’t included sufficient papers (probably in order to try to avoid import duty) which meant a whole lot of hassle at this end. I finally managed to pay all the extras yesterday and got the camera out. It is very cute and tiny I must say. I think I even prefer its Japanese name. 😛 But yeah, there are some drawbacks in ordering these sort of more expensive items from Hong Kong sellers (I’ve never had any problems with cheaper stuff, like film etc.). Also, the charger has an US plug (I was promised an adapter though), the manual is in Japanese (got to print out an English manual) and the promised warranty seems to only be valid in Japan… Oh well, fingers crossed there’s nothing majorly wrong with it eh. 😀

Off to England tomorrow (again). Please don’t let it rain.