Well, it seems I can’t sleep so might as well try to update some blogs (ain’t it horrible when updating the details of your life to the world becomes a task!) and stuff.

I’ve been feeling really cranky for the past couple of days. Just all blah and pissed off. I wonder if it’s PMS. I hope it is. I hope it passes before my head gets completely fucked.

Went to see Miami Vice with Jenni today. It was satisfying for some parts but quite… flat on the whole. Colin of course is always satisfying. Even with a blond mullet. And my god, the man can dance as well! It must be destiny… Err anyways. What always drew me to the original series was the atmosphere. There’s this sort of definite Miami Vice feeling you get, like the excitement at the pit of your stomach when stepping into a nightclub combined with the sadness at the end of an evening after too much drink and too much… everything. The cool and hedonistic combined with the ugly side of life. It always fascinated me how they did that, with the style and the music. The film definitely had some of those atmospheric moments in it, just not enough to carry the whole thing through.

The plot was a bit run of the mill and not awfully interesting. I agree with Jenni that the cinematography was quite fascinating, moving in between the slick neon-lit coolness and this grainy almost documentary-kind visual world. I do think this worked well in establishing the dualism that was always the most interesting part about the concept – how their undercover roles were so cool and able and in control, but how back in real life they were just people with fears and problems. However, cinematography alone isn’t going to create the tension and grip that this film lacked.

I waited and waited and waited for the titles and the theme tune. It never came! How can it be Miami Vice without the theme tune and the flamingos! Must be some sort of a licensing problem there or something. Still, sucks quite hard if you ask me. Also, how comes – if even Colin went bravely all out with his bleached mullet and the most horrendous mustache ever – couldn’t Jamie Foxx grow proper Tubbs curls! What is he… too cool for his own good or what. Pfft. Anyways, he was nowhere near as cool as the watery-eyed Philip Michael Thomas used to be. More like a cardboard cut out in the background. Having said that, none of the actors really had that much to work with. Colin conveyed as much as he could with his expressive brow, but the script sure as hell didn’t give him whole lot to work with. And there wasn’t really any chemistry between Farrell and Foxx, I actually think that Colin is too intense an actor to be half of a ‘buddy’ movie, his worst films are the ones where he has to share the screen with someone (like S.W.A.T.).

But the biggest gripe of all… where the hell was Crockett’s boat and Elvis the Alligator!!! Miami Vice my ass…

Oh I think I forgot to show you the nice coffee table we got as an engagement present from Stu’s parents (well we got some money which we spent on the table). Isn’t it scary, I’ve become a person who’s living room furniture is mostly in the same range. And I never thought the day would come that I’d buy a glass top table! It is nice to be able to look at all my pretty magazines through it though. 😀 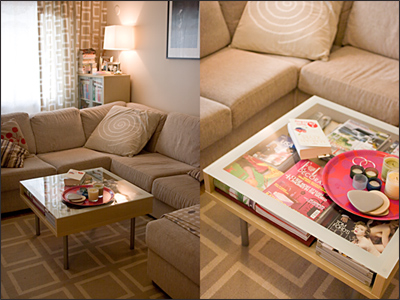