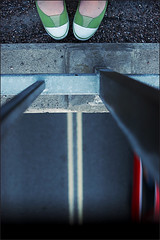 I can’t sleep because it smells of fish in the bedroom. Seriously. I have no idea why, but it’s disgusting. The lightness is also keeping me up. Not in the way that it’s too light in the bedroom to sleep with the curtains drawn, but in the way that the summer nights are too damn nice to waste by sleeping! Yesterday I was standing outside at 4am marvelling at the calm light and the glorious smell of summer. Nights are definitely the best thing about summer in Finland.

It’s been ages since I blogged (well, relatively ages) because my domain was down for some time for no reason and then I just sort of forgot about the whole thing. Oh well. I’m sure no-one’s world will end. 😛

Went to Miikka’s 30th birthday party on saturday and I nearly kicked Late’s ass in Texas Hold’em. 😀 We were at it for hours and it was soo even throughout. But then I let him win in the end. 😛 Yeah. I was the designated driver and driving home in the middle of the night in the relative lightness, without many cars on the road was just pure bliss! I think I might have even hummed the odd note of ‘Born to be wild’…