Once more we’re at the start of a new year. They seem to come around a lot faster with each passing year…. Strange that. While I start this year with optimism, the festive spirit is somewhat dampened by the horrible catastrophe and the way it effects so many people around the world. Just in Finland, there are around 300 people missing and presumed dead, which in the big scale of things isn’t a lot, but in a country with as small a population as this, is a massive amount. Many empty desks at schools. Many people trying to make sense of what happened. I can only image how devastating things must be at the heart of the devastation. 🙁

One thing that these current events provide is the sense of perspective. I feel so lucky to be alive and adamant to appreciate everything I have in life. Sometimes it’s easy to forget how lucky most of us actually are. Even if worries and problems can’t be measured on any scale, in the big picture of things I should be quite happy with my life.

Last night we celebrated New Year’s Eve with Stu, Eve and Teuxi. Eve and I were mainly taking pictures of the fireworks on the balcony, while the boys drank themselves silly. Stu managed to get bitten by Nippu and is now complaining that he’s missing a finger, although I reckon that’s a bit of an exaggeration (it does look pretty nasty however). Anyways, the Eve was quite low-key, which was perfect by me. Feeling very dizzy now for some reason, even though I didn’t really drink that much or anything.

OMG Colin Farrell on telly. Drool. Without a shirt. <3 Who knew the Dicovery Channel could be this entertaining... In 2004

– I got my first digital SLR

– I painted the bedroom wall purple

– I went cruising to Stockholm 3 times

– My best friend had her first baby

– Another close friend got pregnant (can we see a pattern here?)

– I spent my birthday week in Italy

– I celebrated my 5-year anniversary with Stu

– I traveled to England for work 11 times

– A close friend moved back to Finland after 5 years abroad

– I shot a lot of pictures

– I will shoot a lot more, with the aid of my new flashes

– I’ll hopefully decide whether to leave my job or not

– I hope to travel less for work and more for pleasure 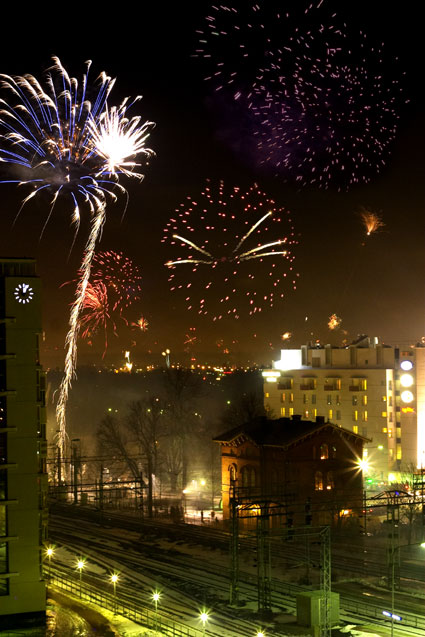