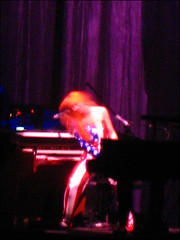 To start with, I must confess that when I found out Joshua Radin would be opening for Tori Amos at the Hammersmith Apollo on the 4th of July, I was over the moon as these days his music is probably even closer to my heart. He came on stage at 7.30pm and we managed to miss half of the first song since there was not really any announcement or indication that everything was about to kick off. The hall was only half-full at this point, which worked out fine for us as we got seats a lot closer than our assigned ones. It was a simple set, mostly with him and his guitar, and of course his beautiful beautiful voice. The gentle warmth of it was a really comforting experience live. Oh how I wish the set would have been a bit longer than half an hour. At some point Schuyler Fisk joined him onstage for a couple of songs. Her voice is absolutely gorgeous as well. Can’t wait for her to finally get her album out! It’s not surprising they have recorded and toured together, the chemistry was obvious and their voices gelled in such a pleasant way.

After the set there was a half an hour recess before Tori, and I managed to track Joshua down and ask him to sign my t-shirt. I don’t believe I’ve ever been so starstruck in my life, for some reason I completely lost any sort of ability to act like a normal person. I went over planning on having a little chat with him, but all I managed to get out was ‘I’m so lucky you were here!’. Like, seriously… It barely makes grammatical sense, and isn’t exactly an opening line that leads to intelligent conversations is it. Oh man, I still cringe. 😀 He was lovely though and gave me a hug and posed for a picture with me.

By the time Tori, or should I say Isabel, came on stage the audience was packed, and we were back at our almost-backrow-seats. I’d categorise myself as a somewhat relapsed Tori fan, although two of her previous albums have brought her back on my playlists in a strong way. She certainly has a strong presence live and her performance was spell-binding from start to finish – even from where we were sitting. I wish I had a set list as it was sooo long it’s just impossible to remember the order of any songs. About a third-way through there was a costume change while a dance version of Professional Widow played over the speakers as a distraction. When she re-appeared again as Tori she was dressed in over-the-top sparkly stars and stripes outfit. Well, it was 4th of July after all!

I saw the recording of Tori’s performance in Provinssirock earlier this summer and I think the first half of the set followed pretty much the same list. Performing with the band she really throws herself in the music and looks like she’s having a lot of fun. I really like her live rendition of Cornflake Girl, it somehow has a lot more spunk. However, my favourite part of the gig was when Tori was performing alone with her piano. Her voice had the chance to really shine through sending shivers down everyone’s backs. Her voice certainly has an incredible range and she can go from an intimate whisper to really belting it out taking the listener on this gorgeous rollercoaster ride. Her mastery with the piano/keyboards is something to behold as well. She played all her instruments, sometimes two at a time, with such ease and passion that it was a joy to watch.

One thing that can be said about Tori is that she certainly isn’t a ‘people pleaser’ in the way that she communicates very little with the audience. I think the only comment was something about it being the 4th of July. That’s alright though, as it’s fascinating to see someone really throw herself into every performance and let her art speak for itself, like she does.

As I said, it was a very long gig, she sang from 8.30pm to almost 11pm, which is probably the longest I’ve seen a single artist ever perform, without a recess. I can’t really fault any of the songs she performed, but the ones that stuck out for me – all for different reasons – were Big Wheels, Winter and God, which was one of the encores and really reminded me how big an influence she did have on my music taste back in the day.

It was a great experience to see her live, and not entirely unlike rekindling an old love affair.