Just found out that Antonia has landed a new posh job and is leaving in 6 weeks. It makes me sad since she’s really nice and now I won’t have the chance to get to know her better. When I came here for an interview my first impression was that this place was a bit stuffy and scarily similar to my old stuffy work environment. Antonia was the first person I met when she came to greet me and brought me up for my ‘test’. She was so nice and relaxed (and young!) that I thought, hmm, maybe it wouldn’t be so bad here after all… So it really bums me out that she’s leaving so soon after I started. Well, at least there’s leaving drinks to look forward to!

Heard from Matt today. Everything at the old office sounds like business as usual (it’s press week there as well). The usual entailing the not so pleasant atmosphere and difficult managers. In a way I really miss it there, especially certain people, but at the same time I’m also relieved that I don’t have to deal with that atmosphere anymore. Really should get around to arranging meeting up with folks from there though.

The weather is warming up, which is nice. It could kinda cap at about 20C, that would be warm enough to not wear a coat, but not so hot you melt commuting to work. I do hope the weekend will be nice though. Want to go to the seafront on our little trip, Weymouth or somewhere. I don’t know what it is with the sea; it just calms me down and makes me feel more complete. 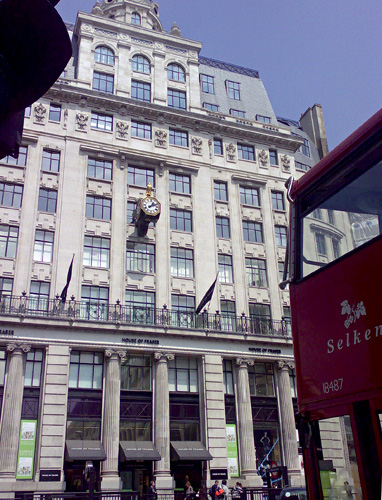 Back from lunch. Can I just say: Oh. My. God. I decided to walk to House of Fraser at Monument as the weather was so nice, just to maybe pick up a new mascara. I was looking at pretty packages at the Benefit counter when a girl came over and asked if I wanted her to tell me about their new products. I hesitated just a nanosecond too long (while I was thinking that yes, I would actually like to know about that new product which is like benetint but isn’t benetint) and she managed to pin me down on a high chair and proceeded to slap stuff on my face at warp speed. I think I was in too much of a shock to move and just glazed over while she was fetching more and more product to rub on my face. Actually, on half of my face. Umm. I sat there thinking how on earth can I go back to work with half of my face covered with all sorts of stuff and managed to convey my worry to the girl. She was very understanding and decided to include the other half of my face in her experiment as well.

The end result? My face was completely orange and so shiny it could probably be seen from space, with some lovely red cheeks to boot, to give it that ‘healthy glow’, also known as the ‘clown look’. Nice. Obviously I hadn’t taken my makeup bag with me as I didn’t want to carry too much stuff on my trek over there so I had to sheepishly walk back to work with my shiny orange face trying hard to avoid catching anyone’s eye on the way. I’ve now managed to tone my ‘look’ down slightly with the help of tissues and a lot of powder, but I still feel oddly sticky… Talk about traumatic!

Having said that, I did in the end buy a benetint pocketpal (and got some free samples as well).