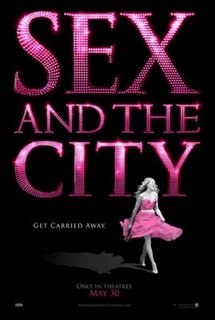 I remember when I saw the first episode of Sex and the City (and I just can’t believe it was 10 years ago!). A Finnish cable channel was showing the first season, before the show hit mainstream TV, and the title (ha ha) somehow caught my eye. I was hooked from the first minutes. I imagine there are a lot of people (majority of whom are probably men) who don’t really get what’s so great about the show. But for me, it just has everything a girl needs. Candid conversation, great clothes, fabulous shoes, real issues that are not usually portrayed in such an honest manner and an all-round comfortable, even cozy, atmosphere that makes you feel like you’re spending time with your friends. And even though Carrie as a character is someone we feel we should envy, if not only for her job and her wardrobe, her problems are real and universal and there’s something exceedingly comforting about the thought that despite the circumstances all women ultimately have to deal with the same issues.

It was a sad day when SATC came to an end as a series. It was truly like losing a friend. That’s why more than anything the prospect of seeing SATC: The Movie felt like a reunion, like finally catching up with the friends you haven’t seen for ages because all of you have been too busy with your lives to organize a get-together.

And the movie certainly didn’t disappoint. I was hesitant to begin with about how the half an hour, one-issue-per-episode, format would convert into a full-length movie. The way they dealt with it was to have a wider subtext, i.e. love, on which you can easily build a whole movie on, while dealing with multiple issues and not making the film feel like it was just an overly stretched episode. Obviously with a underlining subject like that, yes, it was sugary, yes it was soppy at times, but in the end everything was just in the right proportion. There were a lot of laughs, there were moments that made your eyes water, there were moments that made you relate. And there were lots and lots of fabulous clothes and lots and lots of to-die-for shoes.

There were also some great performances. I was especially moved by Kristin Davis’s Charlotte. The length of the movie gave her the chance to show off her range, which covered everything from superbly funny to some fiercely raw emotions. Charlotte was never my favourite character in the series, but I have to say that she just might have been my favourite in the movie. And she certainly delivered the biggest laughs of the film in a scene, which should have been the lowest form of humour, but got elevated to something more complexly funny just because of the fact that it was Charlotte.

All in all, I think the movie was a success. The same atmosphere was there, but at the same time it managed to elevate some of the elements to a higher level. Most of all, it left me feeling comforted. Safe in the knowledge that life goes on and that it’s forever evolving and that even after the happy endings there’s work to do and issues to deal with. It also made me feel like picking up the phone and getting in touch with the real life friends that I haven’t seen in a while. Oh yeah, and it also left me with this unexplainable urge to go shoe shopping…