This week has been pretty full on, in good and in bad. Can’t remember a time when I’ve last been ‘out’ after work nearly every night of the week. Slightly exhausting. But there’s something to be said about being busy, it definitely has a way of making you feel alive, and like you’re a part of life in general. As much of a homebody as I am, not making the effort to interact with the outside world can have a very isolating effect. And currently I’m really enjoying just getting out there and meeting new people, making new connections, getting new ideas.

On Tuesday I attended a ’round table’ do, with some techy bloggers and representatives from 3UK, which came about through my association as an INQ1 tester. I was all prepared to share my views on what 3 is getting right, what wrong, and where I think they should be heading towards. But as it happened, I was waaaay too slow to butt in anywhere in the conversation. I felt like a bit of a dunce to be honest, but none the less, it was still really interesting, I think I went as far as saying ‘exciting’ on the night. God knows I’ve at times been really frustrated with the 3 coverage (and help desk) during my years as a customer, but after hearing for myself how they are going about trying to make a difference, I feel quite intrigued to stick around. It’s refreshing to hear from a company who genuienly wants to listen to their customers and make new ways of communicating available for everyone. A fact which was confirmed on Thursday, when came the announcement that 3 will be offering free skype calls to everyone, which I’m sure left other operators reeling.

On Wendesday I had a meeting with an author about shooting headshots for her book jackets, which was pretty exciting. She divides her time between Venice and London (jealous much?) and her flat by the Thames was as unbelievably nice as she herself was. I must say I’ve never visited such a beautiful home before. One of the things I absolutely love about my photography gigs (apart from the photography itself that is) is getting the chance to take a peek into the different lives people lead. It’s truly fascinating.

And to tie that thought into Tuesday’s 3 event, I’d add that on a personal level, the best thing that comes from that sort of things is getting to meet new interesting people. It’s really refreshing to hear new points of views and life stories. Which leads straight into my Thursday when I popped out for after work drinks with Ant from Fresh Plastic, whom I met at the round table do. I’m glad I did as the weather was gorgeous, the South Bank heaving with people, and I thoroughly enjoyed the company. Good times.

And then Friday. Less said about that the better. A complete meltdown in the office due to a network error, which resulted in a big part of the issue – due to go to press that day – having been wiped out. Long story short, the latest backup files we ended up with were from the previous Friday, so I’m still in the middle of trying to re-create a week’s worth of work by next Tuesday for there to be any chance of the magazine going out in time. Hey ho. Oh but I must say that Twitter is pretty friggin amazing. As soon as I posted about my problem the advice started flooding in from all over the world. I felt truly amazed and humbled at how many people were trying to help me! Anyone who says social networking is a waste of time has no idea what they’re talking about. End of.

Yesterday was finally Lucy & Richard’s wedding day. In the morning it looked like it was going to rain, but luckily the weather held out and what started as a gloomy morning turned into a gorgeous sun-baked afternoon. The wedding was brilliant, even if I was absolutely cream krackered afterwards. And again, I could go on and on about how cool it is to be able to get to be a part of other people’s lives if even for just a brief moment. So very very cool indeed. But yes, I was way too trigger happy and the editing work looming ahead freaks me out a bit. Not going to even start on that until next week though. I’ve booked a couple of days of annual leave from the day job, which, when added to the Bank Holiday weekend, should hopefully give me enough time to process this wedding. Dreading and looking forward to it in equal amounts. 😀

But today has been all about re-charging. I was sorely in need of a day off, so today I ‘ve been concentrating on catching up with my Sky+ recordings and unread magazines. Even got around to reading the David LaChapelle special edition of PHOTO magazine I got in Paris. That was a long time coming! 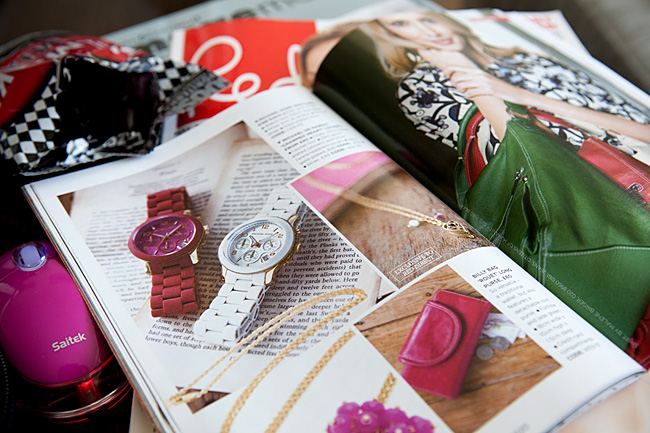 Oh and can I just finish up with sharing how much I love Red Direct, the online store for Red magazine. I especially adore the little catalogues that come with the magazine, so well layed out, bursting with such perfectly photographed pictures of their brilliantly edited collection. Someone there really knows their stuff. Is it weird that flicking through the catalogue gives me immense pleasure even if I didn’t order anything…

Wow. This turned into a bit of a monster post! I guess a day off can have that effect… 😀