Soo, I finally went through the snapshots from Saturday’s Gadget Show Live. I travelled up to Birmingham with 3mobilebuzz, as part of a small team of bloggers. We were given fun little challenges, and were sent off to roam the stands upon stands of new cool things. Not such a bad deal.

We started off from the 3 stand, above. Pictured are our hosts Seb and Matt, with a fellow blogger, Rocktographer. Our first challenge set the pace for the day really.

We plunged head first into the, sometimes bizarre, world of all things gadgetry. 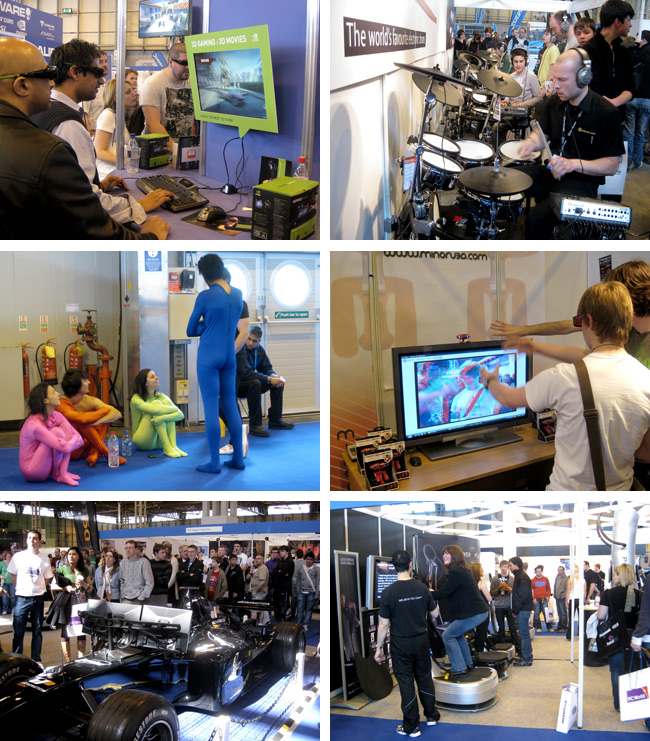 All the boys really loved the Nvidia 3D gaming and Roland V-Drums demos. The Minoru 3D webcam though, not so much. I tried it with the glasses and couldn’t really understand what the point of it was. There was also a puzzling amount of all sort of ass-jiggling equipment on show, which made for some amusing viewing at times.

Above are the most useless, and the most bizarre gadgets, that I chose for my challenge. I really couldn’t understand why anyone would want to wear an ugly thing like the Swap ‘smart watch’, which is a watch+phone+camera+mp3 player etc, etc, all in one, when you could just, you know, use your phone. LG had a similar product on their stand, called the 3G Touch Watch Phone (LG-GD910), which looked a tiny bit more attractive, but still, I would classify these as completely useless. Perhaps in the future, when all that technology can be packed into small enough space to look at least remotely appealing on your wrist, I might start warming up to the idea. What I found to be the most bizarre aspect of the show was the multiple stands for different companies selling electric cigarettes, such as the E-Lites. Just say no. 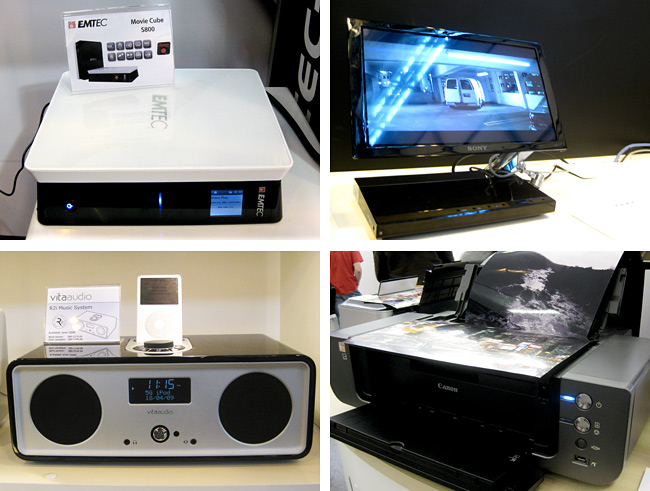 Here are some of the gadgets that managed to raise my pulse somewhat. I really liked the look of the Emtec Movie Cube S800, attractive and useful, what more could you ask for in a gadget. I gave the ‘most innovative’ title to the Wattson energy monitor (no picture of that sorry!) from DIY Kyoto, which was an absurdly sleek looking for such a ‘green’ and sensible device. Oh and also, the Sony OLED TV’s were pretty damn impressive. But what I found most sexy and desirable (as per the challenge) though, was the Vita audio system, possibly mostly for it’s absolutely beautiful design. And the dude demonstrating it for me wasn’t half bad either! 😛

My second challenge was to find something that could take my photography to the next level. I must say, the camera gear on show didn’t do an awful lot for me, but then it wasn’t a camera show and not aimed at professionals. The top model there was the 5DmkII, which I already use. I did drool over the Canon PIXMA 9500 at the Warehouse Express stand though (never mind that they didn’t have the Canon PIXMA Pro9500 Mark II on show), it would be kind of great to be able to make A3 prints, but I could never find the space for such a monster! I did manage to make two purchases though, in the shape of a Gorillapod and a mini umbrella/flash bracket kit for my 580EX II.

The most dense gathering of geeks was around these pretty cool RoboSteel sculptures, which are hand-made from scrap metal auto-parts. They were pretty slick I must say, but then again, I was part of the gathering! 😛

The girl in me really warmed to the different sleeves for gadgets on show. While DigiSkins had the widest selection of skins on their stand – some of them really cool designs – I for some reason preferred the smaller stand for Wrappz. Their skins seemed somehow more durable, and also they were the only ones offering software for completely customisable skins, which I think is pretty rad. I got a few samples from Wrappz and thought I’d give them out as I don’t own either of the devices they’re for. If you want to win a skin for either a Sony PSP 3000 or an iPhone 3G, comment on this entry with your preference and I’ll draw a winner sometime next weekend (unless no-one’s interested that is!). 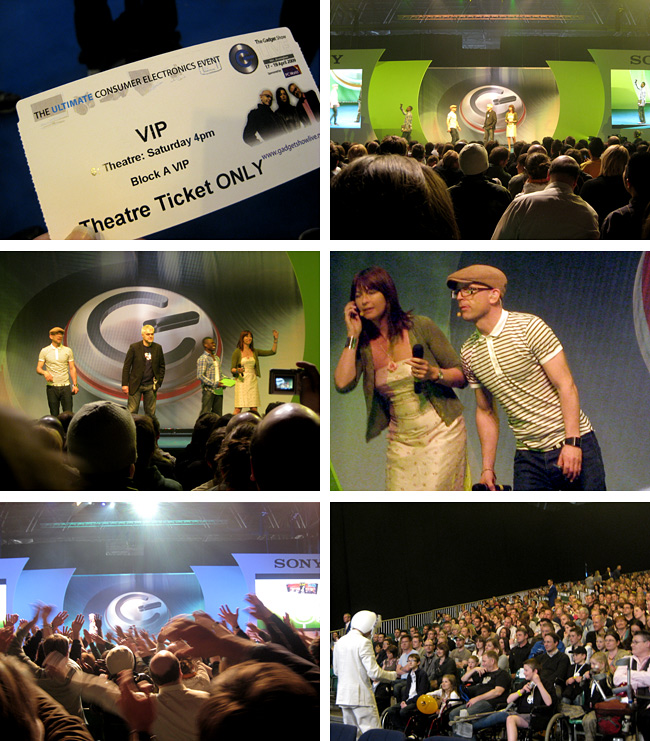 We wrapped up the day in the Sony Super Theatre, where we got to enjoy a live show hosted by the presenters of The Gadget Show: Jason Bradbury, Suzi Perry and Jon Bentley. For the first time in my life I was a VIP, which meant I got to sit on a blue seat instead of a green one. 😀 Awesome. The show was good fun, with a lot of interactive games with the audience. It was a nice way to end the day.

It was a long old day (and I know I whined enough about getting up at such early hour!), and train delays meant I wasn’t home until after 9pm. But it was all good fun – I got to see a lot of toys, and got to know new interesting people. So I’d say it was well worth it!